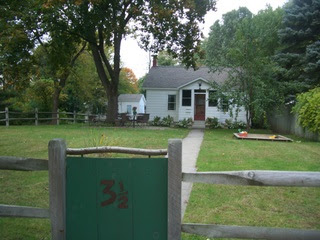 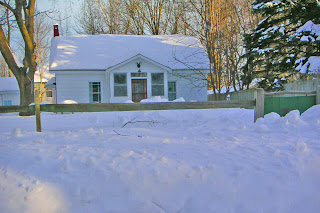 Our House we left in Saratoga Spring, New York. Summer - Winter
This is the 1st email & photos I sent to my friends & family Dec. 9th 2006 just after the Internet was hooked up. Now starting our fifth year here it's interesting to see first impressions with my old new eyes.
Hallo from Fair ,
We made it! While packing up in we thought we might never make it out. Many thanks to our family & friends for their help and continued support.
After two days of numerous air planes long layovers and delays, we made it to the Shetlands. The cross winds from the approaching storm were so heavy that I didn't realize that the beautifully lit up runway about 45 degrees to the side of my window partially obscured by the wing was where we planned to land. The plane was already pretty low as it descended in a big arc (what is known as severe crabbing) until touch down then gunning it down the runway trying not to be blown off course, really it was prefect and amazing I'm sure they have done it hundreds of times… but I haven’t! The storm came in right behind us, it was raining with stronger winds by the time we left the airport in are rental suv packed to the gills. Driving on the wrong side of the road Liz did a good job once I told her to just to pretend you are in the fast lane, something she is used to. Once we arrived in Lerwick we check into a B&B. We then went out to eat, the best Chinese food I had in years then of course we went to the opera.
Odysseus Unwound, a modern opera incorporating singers and Scottish knitters.  One of the knitters, is from Fair Isle , the same knitter Liz heard over a year ago on National Public Radio, Anne Sinclair and the musical group Chroma, who we saw last March while in  Fair Isle was also a part of the opera.  It was very good, in a conceptual creative mix of talents way.
The next morning the ferry boat the Good Shepherd was cancelled, so we spent the day shopping buying things (Phones, dishes, glasses, silverware, cappuccino maker etc.) Some we bought new and some we bought in second hand shops. While in one of the so called scrap shops buying a wardrobe, wicker, bookshelf, hairdryer, knifes etc. the sales man says "I heard of you. Your the American’s moving to ". I think this is something we are going to have to get used to... it was first spoken by a man waiting in the airport, who heard us on wamc radio.  Then again by the mother of the child Henry was playing with in airport. She works for a BBC outdoors radio program and wants to interview us. Then again from the car rental person in Shetland.
Anyways… that night we ate Indian & Nepalese food with the reporters and cameramen from the BBC TV News & Channel FIVE News, Sky TV people also waiting to get to to Interviews us. It was fun and the food was great. Back at the B&B the wind and rain was howling.  Didn't look like we had much chance of flying into the island either. Seeing how the next available plane was full of journalist going over to film our arrival. They were planning to charter a special flight for us. Well it didn’t look like we were going anywhere anyways as the hail was coming down fiercely as we packed the car even fuller Henry was now sitting in my lap. We planned to drop of baggage at the Good Shepherd Ferry Boat and then do some more shopping for stuff.
Just as we are about to leave the B&B phone rings... come to the airport now! The BBC team got called away on another story and there was now room for us to go! now!
a weather "wind"ow has opened straight into the  a strong southern wind. 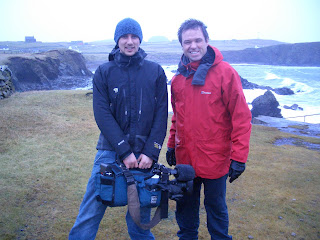 We flew for 25 minutes then buzzing around the south end of the isle to give the cameras a treat. We were exited to see the Auld Haa ,Sheep Rock and the South Lighthouse but it’s where the cliffs meet the that the true awe is found. Touching down was a breeze, soon familiar faces from what seemed long ago rushed up to the plane to greet us and to help with half our luggage the other half to heavy to come is in the still waiting room it should come on future flights? All the while the FIVE NEWS team was taking footage and Dave Wheeler the local photographer Weatherman & web master was taking still photos. The warm welcome was great on the runway.  Shonagh a woman Liz bonded with last March announced she pregnant, and she been waiting to tell Liz in person for months. Great to see Stewart Wilson, sort of the Good Will ambassador plus minister for the Church of Scotland, an older but sparkly gent. He gave Henry, me and a few bags a ride down to the Haa.  Liz rode with Shonagh discussing the baby and our trip. There it is the Auld Haa House, what a view! It’s about 2:30 pm the sun is sort of low breaking though clouds as the massive waves crash and burst on the rocks in the called the Skerries. I think they got that name because it would be “scary” to steer a boat though them. Dropping off our things then rushing up to the store for food & supplies. The little store is surprising in that it is very eclectic, with lots of Asian and Indian foods, spices, chocolates and all the staples one can think of. Really it’s quite efficient and saves a lot of time with no lines not to mention it sells beer wine and liquor also doubles as the post office. 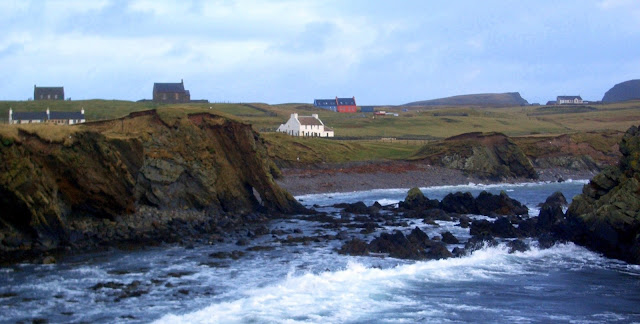 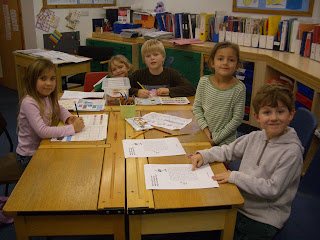 Henry's 1st day at Fair Isle Primary School
Anyways, we get back to the Haa start to unpack, Liz tells me we have been invited to dinner, after she is going to the choir practice. Henry started school the next morning and loves it. He was every exited to see the baby seals on the beach, I even petted one but it didn’t like it much bellowing like old dog it tried to bite me! We are settling in quite well.  It’s been a week now, we are on line. We have a phone. 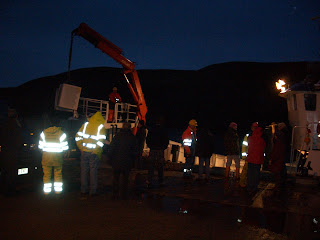 Good Shepherd unloading our new household appliances
about 4 pm and quite dark out
The boat came yesterday finally and we now have a stove, fridge, chest freezer & a heater. The wind died to a mild breeze two days ago.  Now it’s sunny and clear at night with a full moon. I’m finding it hard to work because all I want to do is stare out the window or go for walk along the beach. Today we saw our first rainbow. Now that I find myself writing about rainbows I know I got to stop.
All is well, sorry for the long ramblings. Tommy 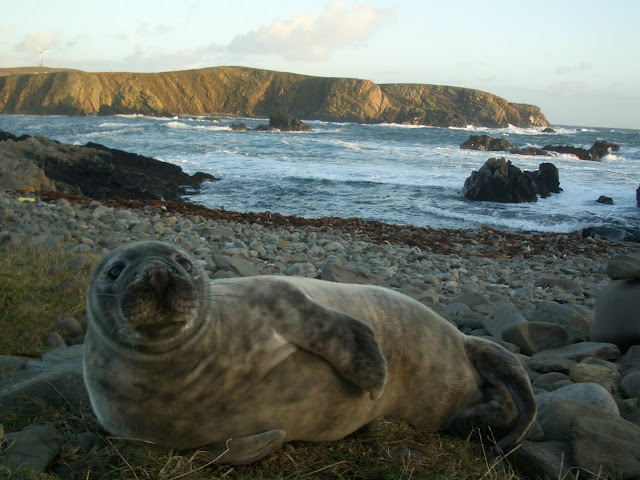