Some of the people looking at my Blog are interests in how and why we 3 Americans live on Fair Isle? and that's just the subject of Liz's (my wife & Henry's mother) Documentary (Still in Development) My Fair Isle Adventure here is a Taste.
Link to: My Fair Isle Aventure - 1 min. video taster by Liz Musser

My Fair Isle Adventure from Liz Musser on Myspace. 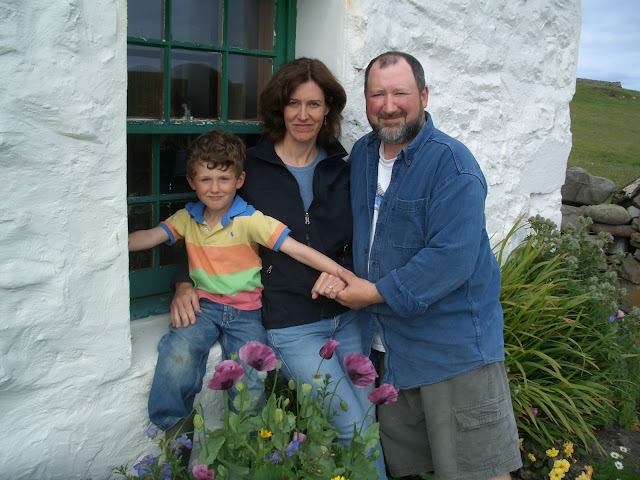 First Person Article for: THE SUNDAY TIMES  by Liz Musser
January 2007 only 2 months after moving to

For a second, the roar of wind and sea sounds strangely like the traffic of , but that’s a different time zone.  No cars on this road. No streetlamps, just the moon reflecting off the wet pavement that winds its way through the silhouetted hills and houses of .  The light that traces the landscape is the beacon from a lighthouse not a search light from a police helicopter.  I’m not afraid to walk alone at night.  There are no wolves here, only sheep finding refuge from the wind behind a stone fence.

I pass Skerryholm, Utra, Leogh and Nether Taft before I reach Midway, Old Jimmy’s house.  The folk that live in a house take on its name.  So even though we are the newest residents, Tommy, Henry and I are referred to as Haa or Auld Haa, the island’s oldest home. 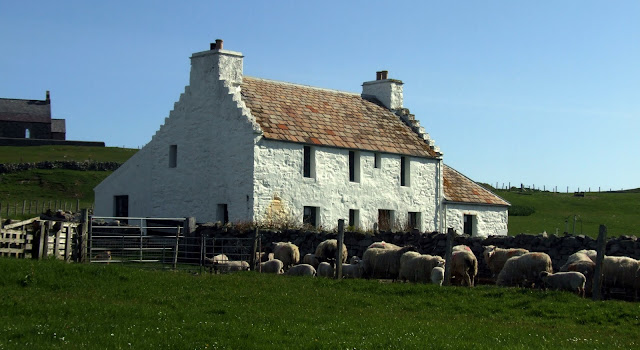 Doors aren’t locked and no one knocks.  I enter leading with my voice, “Hello Jimmy,” feet follow.  I find “Old Jimmy” Stout sitting in the kitchen, in a living room chair, next to a big old stove that warms him, the room and a tea kettle.  The clock ticks loudly giving the silence a rhythm; the measuring of minutes is less important.  Jimmy is 95-years-old, and the time he keeps is from years passed.  “Where’s the boy,” he asks.  I tell him home with Tommy.  I ask him about his boyhood and about growing up on .  He tells me his mother died when he was very young.  His memory is not of her, but of not having her.  “Oh dear, oh dear,” he struggles.  I help him move to the table for his tatties and mince—potatoes and hamburger.  Neither of us says another word.  He eats.  The clock ticks.

At this time 2 months ago I would have been stuck in traffic inching my way home, my mind a thousand miles away.  Now here I am, thinking about traffic and a story I heard on my car radio.  Actually, it was more like the beginning of a story, the main characters and their adventure not yet revealed.  The National Trust for was looking for tenants for a 300-year-old house on a remote .

The best stories are always the ones you can imagine yourself in—facing the conflict that is inevitable, having the courage to take the journey.  For years I pieced other people’s lives together into neat 2 to 10 minute packages with a beginning, middle and end, often neglecting pieces of my own.  As a television news photographer and video producer, I spent long hours editing, weekends on shoots, and too many times kissed my husband and son good night over the phone from a hotel room.
Before I say good night to Jimmy, he places his hands on my cheeks and says, “thank you for being so good to me, Lass.”

In my old job I would have said, “Thank you for time.”  But this is not the kind of job where I can just enter and exit a person’s life; I am a part of it--an intricate pattern of lives linked… an island community.  There’s no one else on the island available to do social care.  Instead I say, “I’ll see you in the morning, Jimmy.”


My greatest fear moving to was not lack of 24-hour--shopping, banking and electricity. I was afraid we might not be accepted into the tight-knit community.  I don’t care how beautiful the scenery or cheap the rent, to be isolated on a remote island would be my idea of hell.  Instead, we got a warm welcome.  Folks knew our appliances were delayed on the ferry because of weather.  And our shipment from had not arrived, still hasn’t.  We arrived with a few suitcases filled with clothes, some silverware, legos, an air mattress, sheets and a blanket.  My purse carried our passports and a frying pan.

The first night we walked into the Auld Haa the radiators was turned on to fight off the late November chill.  Folks rounded up a table and chairs, a stove, a couch.  They offered beds and linens, invited us to dinner, brought over meat from their freezers potatoes from their garden. We were immediately dependent on people.  And that can be an uncomfortable position to be in.  It’s so much easier when kindness is a commodity that can be paid for with cash.

Like when the left wheels of my car went off the narrow road into the rain saturated mud and grass ditch.  Back in the states, I would have called a tow truck, paid a few hundred bucks, and would never have to see the driver again.  Instead, I sat in my car not able to do anything about it.  To my horror, Young Jimmy, still dressed in his Sunday clothes, happened upon my unfortunate situation. I was grateful, of course, but it was the second time he muddied himself pulling me out.  He was a little curt, but “Dat is it.”

There’s a story of his father Old Jimmy during WWII, when German submarines could be spotted off the coast and a weather reconnaissance plane was a regular sight in the skies.  One day that Heinkel 111 crashed.  Jimmy raced to the site.  Three of the crew died.  He rescued a badly injured man and a young pilot.  It was the pilot’s 21st birthday. Jimmy shared a bottle of whiskey and took the men to the nurse.  The German pilot returned to the island two more times during his lifetime.  He gave the museum photos taken from his reconnaissance missions and his diary.

I understand the wreckage still exists. Tomorrow after Henry and I visit Old Jimmy; maybe we’ll look for that plane. Weather permitting.

Weather rules.  And the illusion that you are in complete control of your life very quickly disappears.  For us it happened a day after we left .  The last leg of our voyage was Lerwick, Shetland to via the Good Shepard Ferry, but the weather wouldn’t allow it.  As it turned out, the Ferry didn’t sail for 10 more days.  Fortunately, you have another option, Direct Flight.  The next morning we called, “Doesn’t look good.  Doesn’t look good for tomorrow either, but call back in an hour.”  So we didn’t bother packing, 15 minutes later we got a call, “We have a small window. Can you be here in a half hour?”

As they say in , “That’s just the way it is.”  The ferry and plane go or don’t go depending on the weather, so you may or may not get on and off the island when it’s convenient for you.  During the winter the ferry is scheduled to go to Sumburgh, Shetland and back once a week, the plane 3 days a week 2 times each day.  Besides passengers, the plane carries our mail and some food.

Every time the Good Shepard returns it’s a community event.  A line of headlights makes its way to the .  Crates of fresh fruit and vegetables, milk and eggs, Indian spices and maples syrup, on-line and mail order items—all hoisted onto the pier where a good showing of islanders form a chain to unload.  It’s the kind of community spirit I’ve only seen during times of disaster—usually dieing out within a couple of weeks.  But sometimes it sticks and becomes part of the community.

There was a time when the island was divided:  east verse west, Methodist verse Church of Scotland.  But World War I changed that.  Young men left to fight; those who returned did not want to fight any more. And so the island agreed to worship, sing and pray together--a tradition that continues today.  One Sunday service is held in the Kirk, Church of Scotland; the following Sunday service is held in the Methodist Chapel.

We haven’t been church-goers, but we went on Christmas, so did most of the island-- believers and non-believer,  very elderly, even the teenager who attend school off island were there.  The day after Christmas, everyone on the island attended the “Christmas Tree.”  Years ago a teacher, not originally from the island, had a Christmas tree shipped in because there are no trees.  Every family was invited to celebrate under it.
Now anyone can order a tree through the store.  But the Christmas Tree Party carried on.
It’s geared toward the bairns, children:  Santa revisits and there are lots of games. We closed the evening in a circle all holding hands and sang Auld Ang Syne.

On New Year’s Eve--guising.  I’d never heard of it.  Henry and the other bairns dressed up and did a spoof of The Pirates of the .  We drove them around to perform in houses around the island.  They were well paid with “sweeties.”  That night, Tommy disguised as a crofter, made his way around the island in the back of a van with 5 other masked thespians.  No house with an occupant was missed.  Henry and I enjoyed 4 different performances- mocking George Bush, Tony Blair, and several islanders.

The holiday season ended with one last party.  The men and boys made all the food, served it and did the dishes.   Three generations of Thompson’s played, and Tommy, Henry and I did our best to imitate the Shetland and Scottish dances.  It really was one of the Christmas’ I can remember since my childhood.

We place Henry’s first tooth under his pillow.  He asks if the tooth fairy will find him in Fair Isle, and he wishes he could show his friends back in .  He’s weepy.  I remind him Santa found him.

“Tomorrow we’ll visit Old Jimmy.  Then we’ll try to find a plane from WWII.  We can go down to the tide pools, catch sea creatures and count seals.”  He listens with his eyes close.  I kiss my peerie(small) boy good night. 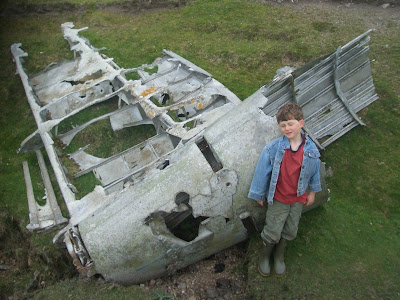