I think every Birdwatchers must see interesting mystery birds that stick in the back of their minds as being different? This happens to me all of the time… especially with Warblers & Pipits. I’m always wishing for better, longer, closer views and sharp clear photos but everyone knows I’m a dreamer. Birdwatching is cruel! It has this way of making common birds look rare and rare birds common. Common wisdom says don't even talk about this stuff unless you're sure but that makes it hard to have an open dialogue and I wonder what others like you might think?

Snow Buntings – March 3rd 2008
I had never seen a Snow Bunting so white before. So much more beautiful and different than the others. I went back to my house to get my camera and tried to get a photo. It was in a flock of about 30 quite flighty birds. I chased the Snow Buntings around the fields of Leogh Croft and final managed this one photo of the bird in question by the stone dike near the road before the whole flock took off to somewhere below Malcolm’s Head. I felt that somehow that this bird was special but didn’t continue to chase it because it was just a Snow Bunting after all, not like it could be anything else? The photo was bad but I had kept it and for some reason and moved it to a select bird photo file on my computer I call “Birds Birds Birds” 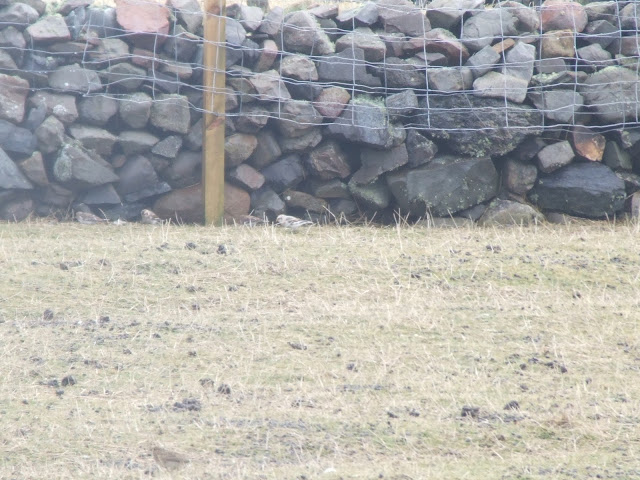 Over a year and a half later while buying the new 2nd addition Collin’s Bird Guide… Amazon.com suggested that I also buy David Sibley’s North American Bird Guide and The Big Year by Mark Obmascik. The Big Year was really fun to read and I can’t wait to see the movie coming out next year with Steve Martin, Jack Black and Owen Wilson as obsessed birdwatchers. But Sibley’s book is very useful for Redpoles and other rare North American visitors to . So this autumn when the Snow Buntings came back I had a look to what Sibley had to say on the subject… and what’s this McKay’s Bunting? Yes in the book next to Snow Bunting is a very similar but even whiter Bunting? Immediately I wanted to check my old photo! But… the power was off, as it was past 11:30pm and  I was reading by battery and candle light. The next evening when I finally had time to check my old photo I was surprised how much it looked like a 1st winter Female mainly due to the white back and all the other matching features. Even the plumage looks right for the time of year? But that must just be a high light I thought? but it’s not on the other birds in the photo? I've considered (lucistic)? But I continue to dwell on the mere dream that it might have been... While searching online I found this great McKay’s Bunting info: http://www.aba.org/birding/v37n6p618.pdf 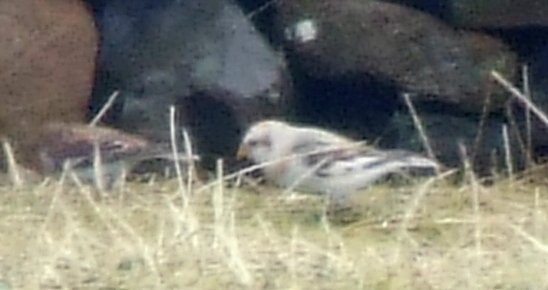 I’m not trying to string anything here I have just found the whole process interesting and educational not to mention a bit exciting at times and thought I would share it. I now know that a bird like a Mckay’s Bunting in would be close to impossible to identify, even by experts in the hand. It would also be impossibly lost... Seeing how anything is possible and this is where things like this do happen? I will be forever checking every whiter than normal Snow Bunting and I hope you join me.

Now another whiter than normal bird ? 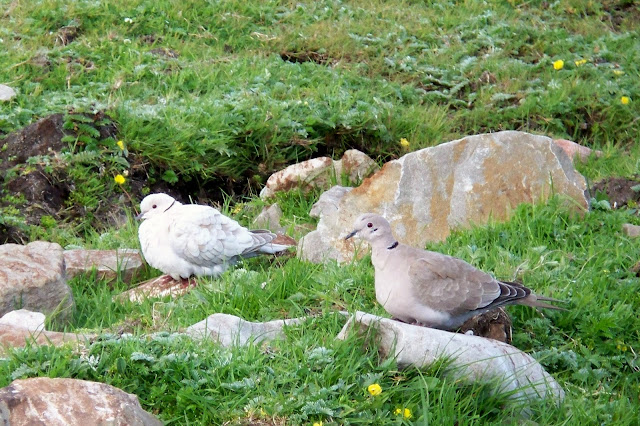 I saw this bird June 2nd 2009 with a few Collared Doves in my garden. When I informed the local experts that it might be a Barbary Dove/African Collared Dove? or a Ringed Necked Turtle Dove as they say in the USA? I was then told “I’m not saying it isn’t. But so what if it is? It’s most likely an escape.”

Well… Birds have wings and I love that about them. So I guess I’ll always wonder where these birds really came from? and I’ll never know.
Posted by tommyart at 17:52