Photos about the Fair Isle - December 2013


Tommy's Spiced Christmas Whisky - Open your Whisky bottle drop in spices. 1 stick of cinnamon, 2 star aniseeds, 7 green cardamom seeds, 1 whole clove and a halve of a vanilla bean. Wait 2 days or more to decant into a custom labelled bottle. Taste often until you like it! Suggestion the star aniseed is strong you my want to use only one or remove earlier than other spices. It really dresses up a holiday spirit. Ho Ho Ho! leave some for Santa. Cheers!
Posted by tommyart at 02:34 2 comments:

I was invited down for Thanksgiving and to see my friends new place just north of the city.
I stayed a few days more because I have been wanting to see the Antoni Gaudi Buildings ever since my History of Modren Architecture course with James Kettlewell at Skidmore College during the Summer of 1983. Thirty years later... I was not disappointed! Amazing! I had a great time and need to give a big thank you to my friends for finally getting me to Barcelona.

I took hundreds of photos here are just a few. 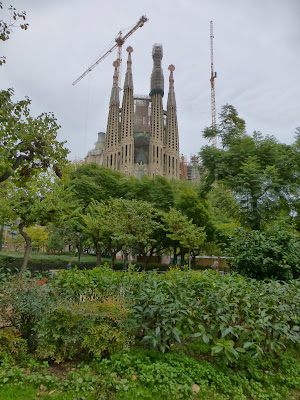 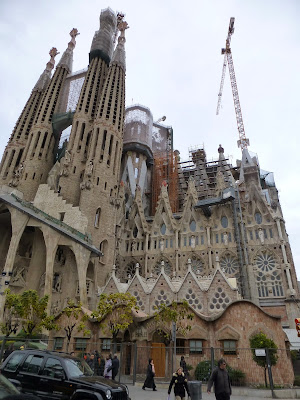 
My birding was done mostly around the grounds of my friends place, Birding was hard, everything was far away and very mobile and then few into the back side of the tree. Black Redstarts where the most common birds around the Casa. The one bird I saw out in the open was a Hawfich up top a tree? I always heard they a hard to see? I did have a few lifer with Spanish resident species not common here in Fair Isle. Serin, Crested Tit, Sardinian Warbler, Spotless Starling, Firecrest, also probable Cirl Bunting and Short Toed Eagle. But the biggest surprise while out birding was sighting 3 wild boars! 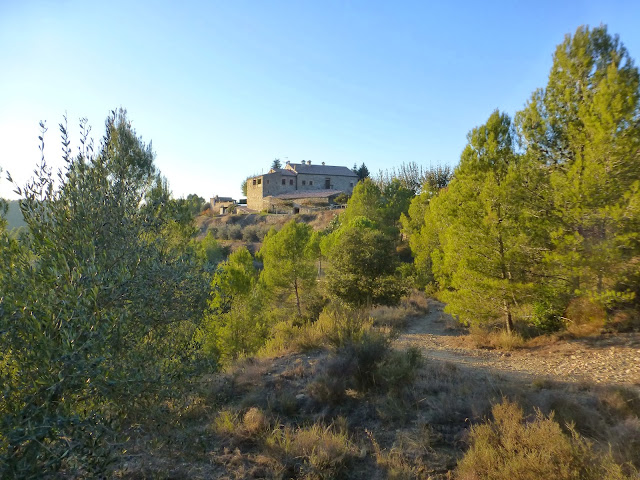 Video of the Wild Boar.

UPDATE: "Birdy" is definitely not Charles Harper's designs. As I learnt this from one of comments left by one of my readers below, Birdy is designed by a group that call them self Magpie. Aptly named as we all know Magpies the birds have a habit of stealing things. Even if the designers honestly don't know about Charles Harper, I'm ashamed of the RSPB for having any connection to the "Birdy" line of products, they should know the history and similarity of images like these so famously used by American birding organizations.
Posted by tommyart at 23:40 2 comments:

All photographs in this post were taken by visiting birdwatcher Kevin Kelly during the few weeks he spent on Fair Isle this past Autumn. My son Henry, Logan and I were standing right next to Kevin as we were all amazed to be so fortunate to have such great views. I was taking video of the Siberian Ruby Throat as he took the photos above. Stunning! Kevin kept his promise to send me copies of his photos of the memorable moment, he also sent a few other highlight bird photographs from his stay.

"It was my first Autumn visit to fair isle after three previous spring visits. Fair isle never fails to produce in terms of beauty but it also delivers on quality of birds too. I am fortunate enough to work for the RSPB so to witness migration at one of the Uk's most northerly points was fantastic. With so many declines in our populations of species such as our seabirds the work of Bird Observatories like Fair Isle go hand in hand with the conservation work we do to try and ensure a brighter future. And these little beauties were just an added bonus to the thrushes and geese that arrive on mass." Kevin Kelly

Kevin can be contacted at kevink1158@hotmail.co.uk

Thanks for sharing Kevin!
Kevin can be contacted at kevink1158@hotmail.co.uk
Posted by tommyart at 08:58 2 comments:

A couple a years ago I saw a promotional image of Black and White Warblers from then the new an innovative Crossley ID Guide for North America. I was hooked! Living on Fair Isle the most remote inhabited Island in the UK. I thought it might come in handy from time to time to identify birds on this legendary rare birding hot spot. Plus, I moved here from Upstate New York 7 years ago, I wasn't a Birdwatcher then, so, I thought it good to familiarize my self with American birds, the ones I took for granite for most of my life. I bought my copy on Amazon sight unseen. I wasn't disappointed, the book is like a photoshopped fantasy land for birdwatchers. I keep my copy handy and it sits often on the coffee table when I am hosting bird tours. It always raises a discussions on bird identification guides. The main debate is photography vs illustration? Like if you could only have one... Why argue, we have and need both!

My son and I are always looking through our bird guides when we are try to learn about or ID a bird we usually look at a illustrated guide, but we find that there is nothing like a photography guide at it's side to really get the full sense of the bird. When we hear about a rare bird sighting on the Isle, we always look at our guide books first before going out to relocate the bird. What I really like is multiple bird photos in different plumages, sexes and distances shown in a appropriate landscape. My old photo guide had one photo of each bird, sometimes in both sexes if I was lucky, this isn't enough information for the type of birding we do here. Fair Isle isn't all about the rare birds though, but then again it sort of is. You might see a common bird like a Bunting, Warbler, Wader, etc. You automatically know what is, but are you sure? Look again it could be that similar rare species from Siberia or North America? And all sorts of rare birds have a habit to get extremely lost and find their way to Fair Isle. Sometimes rare birds on Fair Isle are common else where in Britain. So a good bird guide can really make a difference.

I'm thrilled that they made a guide for Britian and Ireland.
I"m sure it will get plenty of use as my bird guides are the most used books in the house. 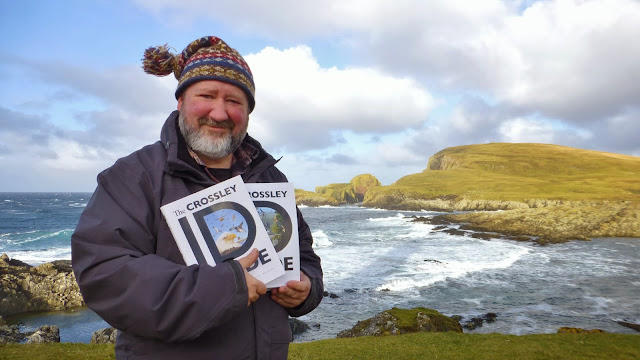 I now have all 3 Crossley ID Bird Guides in my collection,
including the one for American Raptors

fair-isle.blogspot.co.uk is proud to kick off the Blog Tour.
12 days at 12 birding blogs! have a look for the posting schedule.
http://blog.press.princeton.edu/crossley-uk-blog-tour-schedule/

Enter to win 1 of 5 free copies of the new Guide:
a Rafflecopter giveaway
Posted by tommyart at 01:26 No comments: 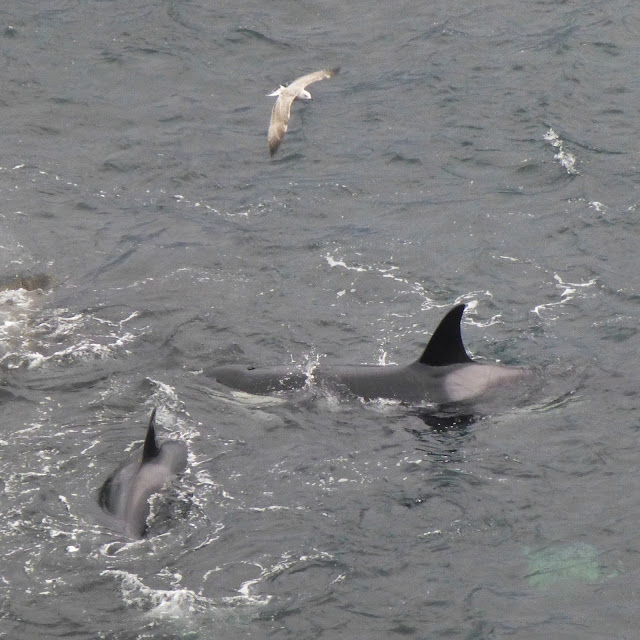 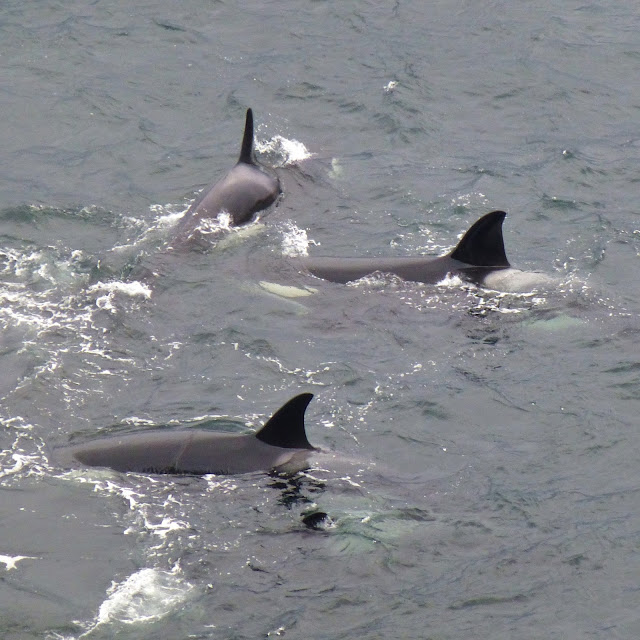 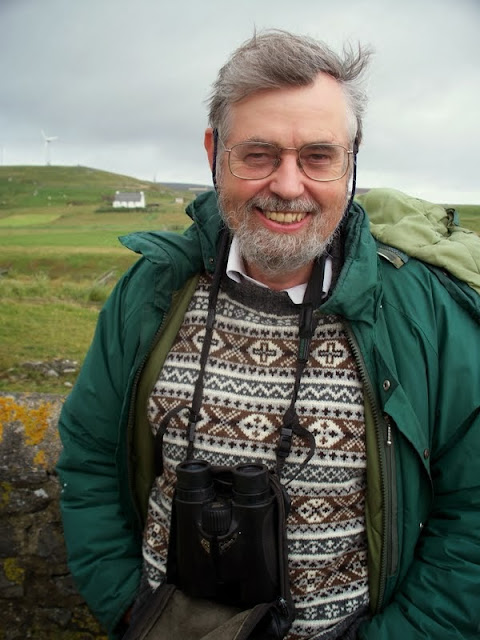 Top honours were given to Fair Isle's Nick Riddiford last night at the Nature of Scotland Awards.
I know that Nick would also give a large amount of credit to this wife Elizabeth, Fair Islander's and the National Trust for Scotland, but take a bow! This award hopefully will bring some more attention to Fimeti and marine park initiative.