Birds on a Stick 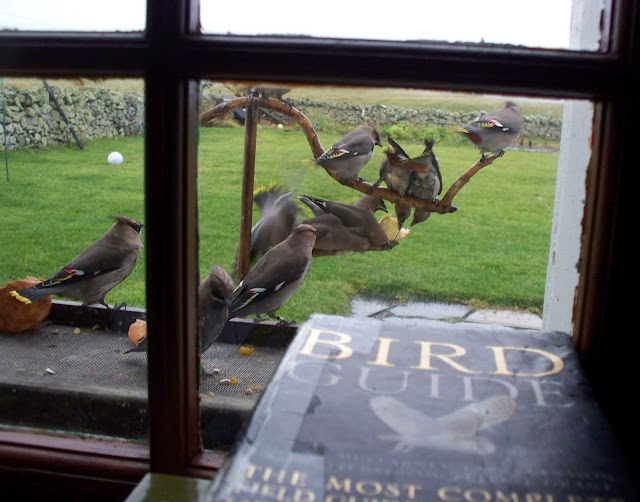 The sticks outside my window covered in waxwings...
I had a pile of books that I was using a tripod. 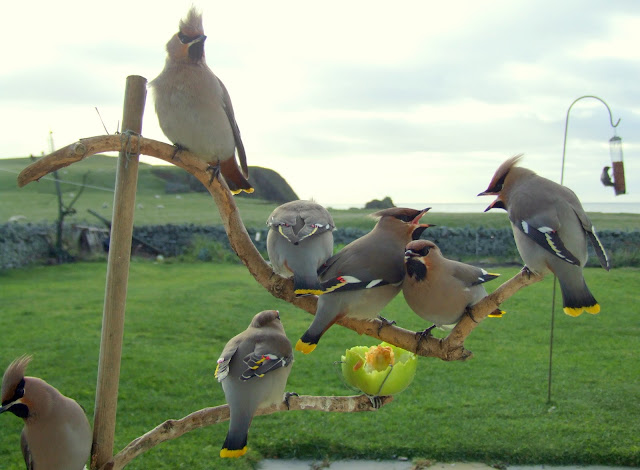 In the end of September I was hosting a birding tour at our Auld Haa Guesthouse, one of the birdwatchers had a camera with a huge lens (cha ching) and was photographing the Blackcaps and a Garden Warbler eating apples on sticks that I wire together to make a small tree. I love feeding birds and have many bird feeders and this "tree" has some wire to hold an apple in the middle of it, it works great and the birds really seem to like it. That is because Fair Isle has basically no naturally occurring trees and not much fruit!  Problem was when photographing it was hard to get a photo of a bird without a apple or a bit of wire in it? 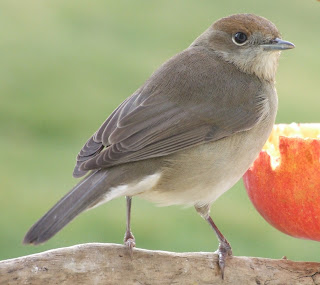 Blackcap & Apple
I had an Idea... between lunch and dinner I had about an hour to fiddle around with some sticks (driftwood) I had collect from the seashore. I wire them together in a way that the apple would sit an inch or 2 below the top stick and the stick with the apple on it is at an angle inconvenient for perching and eating. Then you simply crop out the apple and the other sticks. I stuck it in the ground among the honeysuckle in my garden for a nice background and when the photographer/birdwatcher came back he nailed some awesome shots before dinner and more during the next few days before leaving Fair Isle.
So I had no guest for a few days after they left... so I tried my luck? With my rubbish cameras? no can do! I just can't get close enough. So I move the sticks in front of my window and tried from there. And as luck would have it a Barred Warbler showed up soon after. OMG only 2 foot away! I set my camera on flower mode and clicked away. Sometimes I even got lucky. 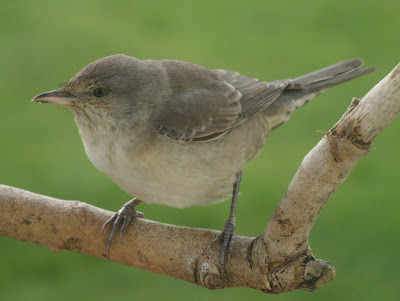 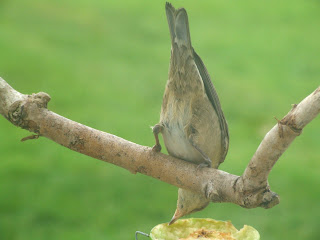 eating and showing it's undertail-coverts
when the bird sits up snap and shoot!
and you can get photo like these. 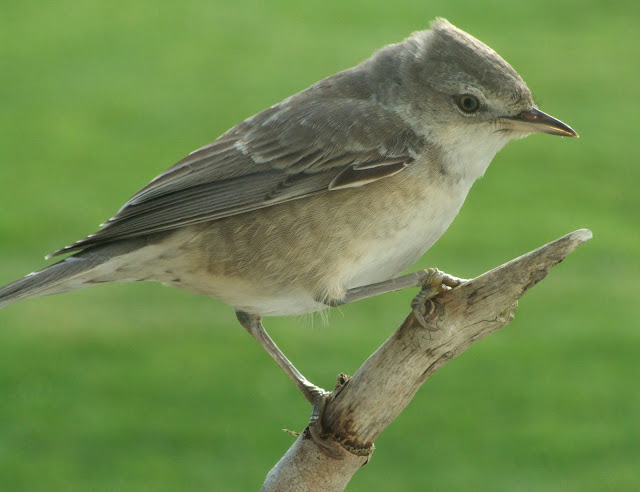 Barred Warbler
I had 3 different Barred Warblers in the month of Oct. maybe I'll do a post at some point just on Barred Warblers of Oct. 2010... I've go tons of photos to sort through... Some visiting birdwatchers even had "Lifers" or life ticks on their bird lists while looking at the Barred Warbler on my stick. It's a bit geekish but this post is becoming a form of a stick list now that I think of it. Here are some of the other bird I have been able to photograph in this way. 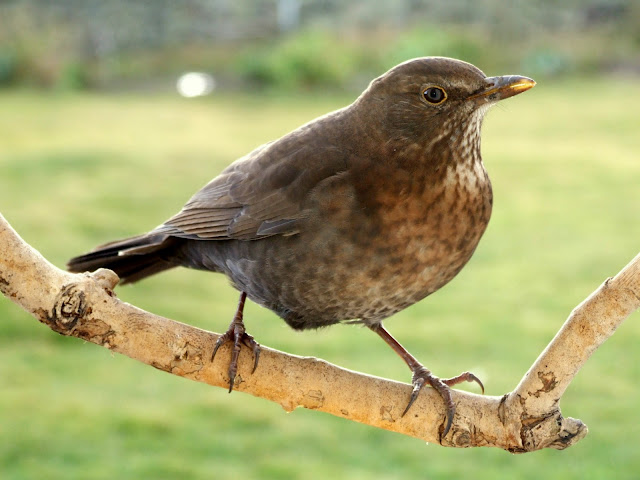 Blackbird
look closely at the eye... no it's not a pale eye of an American Rusty Blackbird...
it's the refection of the white exterior of my house and the dark rectangle window.
You can even see a white dot, the reflected light from the lens of my camera. 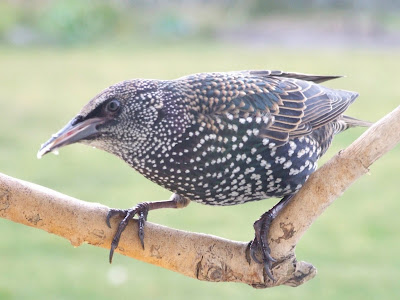 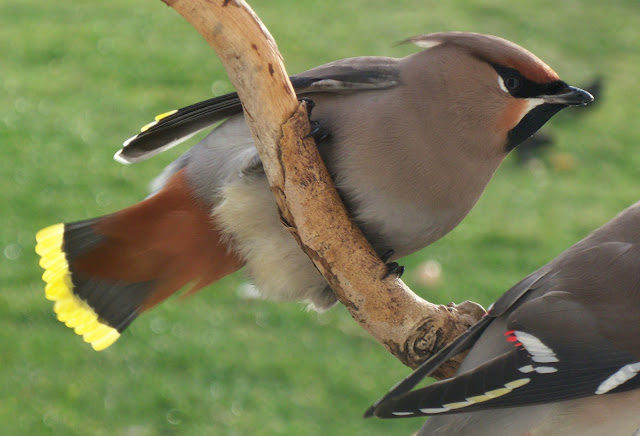 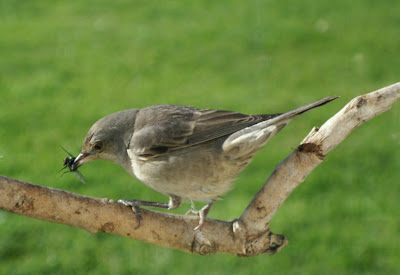 Added bonus... the birds eat the flies that also are attracted to apples. 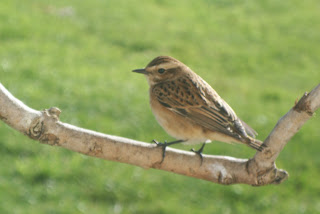 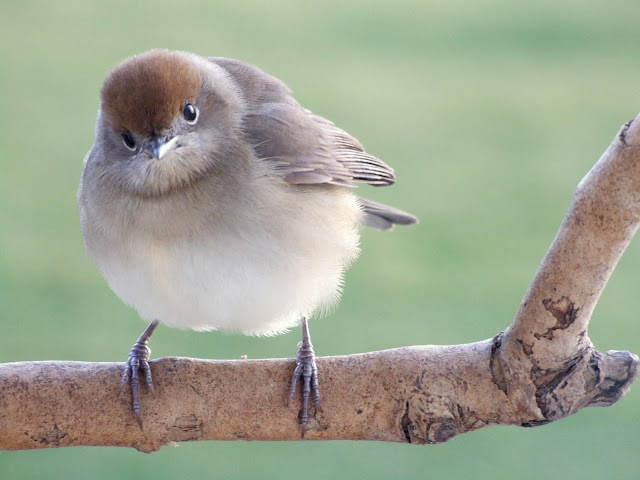 I'm so much cuter with that apple cut out of frame.
Why don't I get to be on Christmas Cards? 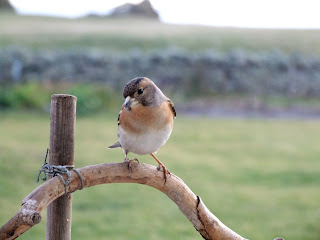 This Brambling doesn't eat apples but rested for a moment on the way to my window box.
I didn't crop this photo... yet 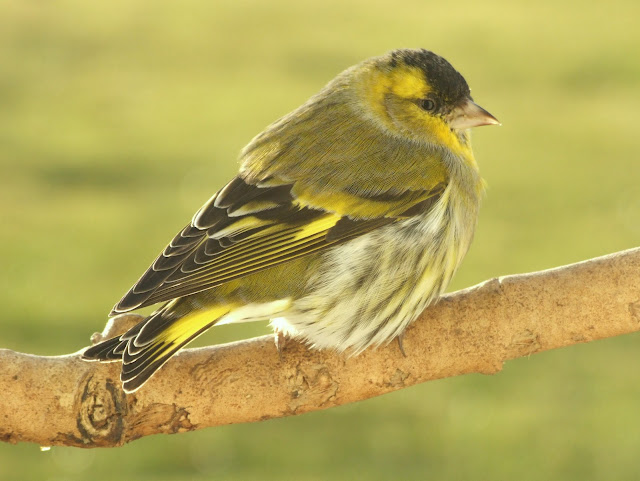 change the apple to a small cup of seeds and you get different species, like this Siskin.


Now I have shown you how to get better photos of some birds in your garden even without a big lens.
I have only been doing this since Oct. 1st and I'm really enjoying the results.
Here is an important tip put apples in more than one spot and some further away.
Once they start eating... at some point the birds will want more and then they are willing to come closer in.
This is my photographic secret, I hope you try it, have fun and success. Cheers Tommy


Waxwing Invasion on the stick outside my widow (22 sec.)
sometimes it works to good! 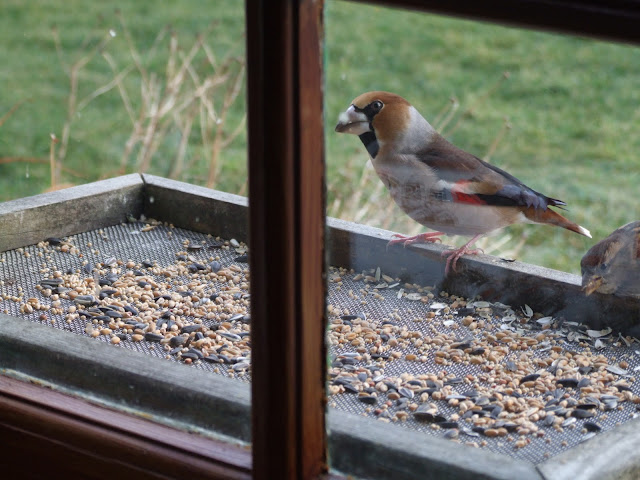 Hawfinch or as I like to call them Auld Haafinch...
it was even on my stick a few times but I failed to get a photo. 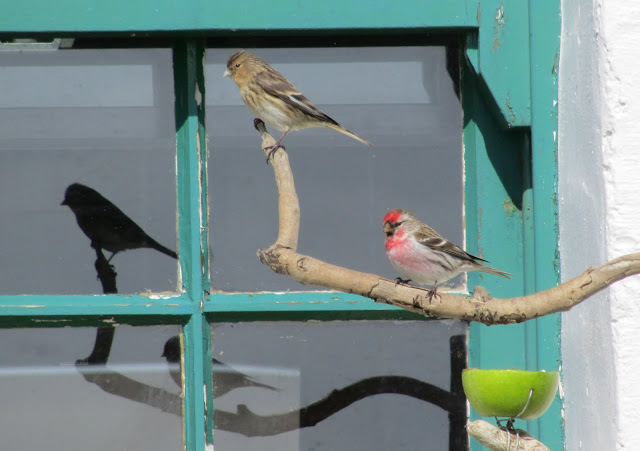 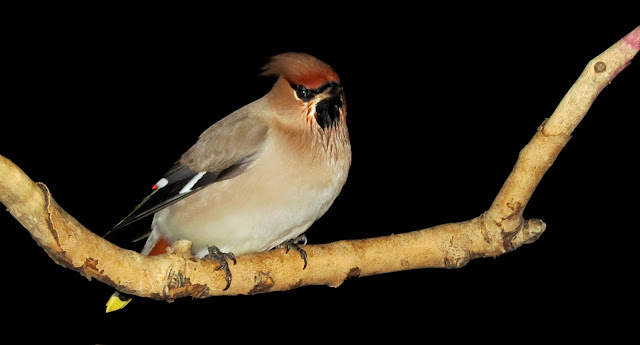