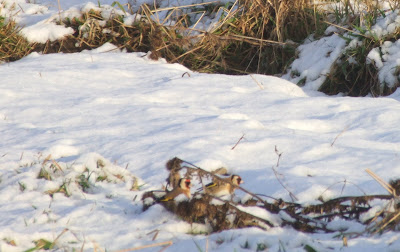 Goldfinch - Lower Leogh Garden  Dec. 7, 2010
These photos are just record shots... but birding on Fair Isle is often all about the records!
I found these 2 Goldfinch the other day and thought at first they would be the latest year sighting ever. I checked the facts in the Birds of Fair Isle book and it's update and found only one other December sighting of only one bird. As my luck would have it also was on the 7th. Darn! I did have 2 birds though as a small consolation. I know not everyone lives in a place with it's birdwatching so well documented, this has it's advantages and disadvantages but if you can find any sort of bird record here you are well chuffed. When I got home I cleaned and filled my niger seed feeders in hopes they would find them in my garden and stay till tomorrow? Nothing. Nowhere on the 8th, and I looked everywhere I knew of thistles.
When I moved here from the States and got my Collins guide that first Christmas 2006 I saw the image of the European Goldfinch and remember saying "I can't wait to see one of these!" (I also said this of Hoopie, Bluethroat, etc. as Henry and I leafed though the pages) and wait I did... I had lived on Fair Isle for more than two years before ever seeing a Goldfinch... that is to say they are not that common here. Seen mostly in Spring & Autumn, in small numbers like 1 or 2 for the same amount of days. This year I had 5 in my garden at the same time. That is also a good record thanks to the power of niger seed. 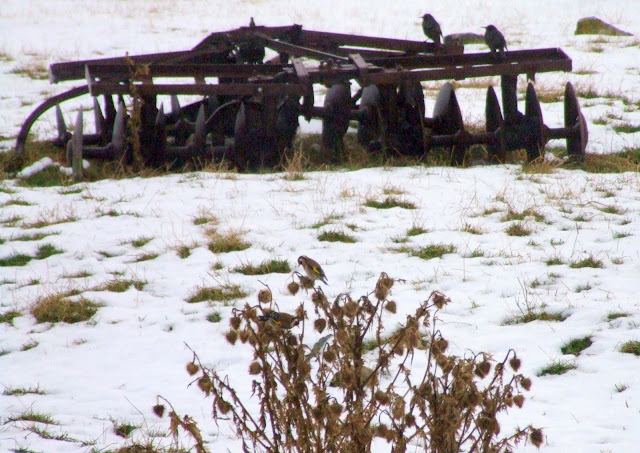 2 Goldfinch 2 Starlings - Gaila - Dec. 9, 2010
Today I filled my birdfeeder again but nothing but nothing... House Sparrows and few desperate Starling on the niger seeds? I know some people would gladly trade a Goldfinch from their garden for the Snipe and Turnstone in mine today... While checking my emails from my computer set up at the table by the window I glanced two birds dart up and back down on the other side of my stone wall at the end of the garden. I didn't get a good look? It could of been anything? Twite? Redpole? The number was right and I had already checked those thistles just over the dike this morning and most of the Autumn for rarities. Today I would rather see a Goldfinch instead of another Arctic Redpole. I quickly get my hat, coat, bins, camera, boots, etc. in the sleeting rain at the end of the my Garden I found my record as I peered over the wall of Pig Street into Gaila  near the Walli Burn. Those of you that know Fair Isle will know exactly where this is by looking at the old rusted farm equipment.  The light was poor at the time and I had to brighten this photo. Later the sun broke though and I was getting ready to get a better shot as I noticed a Peregrine charge in! It sat on my wall for a bit then did a fly by flushing the South Harbor Beach. The Goldfinch were gone... its okay I saw the 2 of them again later by the South Lighthouse. I'm hopeful they find my niger seed eventually and stay to brighten up my Fair Isle Winter?
Posted by tommyart at 20:34