When asked what I wanted for Christmas? I responded in jest “Lowri’s Fair hat”
Lowri’s hat is beautiful, a classic Fair Isle Fisherman’s Hat. It’s long and flops over with a big pom-pom in traditional colours and patterns. The hat was knitted by his great grandmother, Annie, who is retired from knitting for a living and now knits for her family. 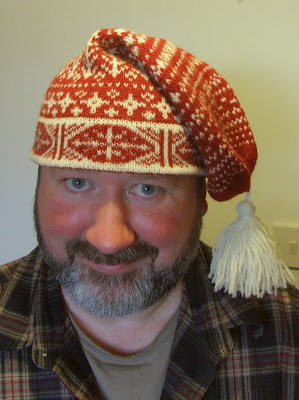 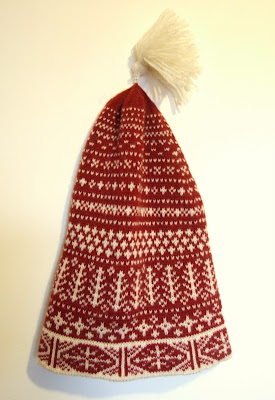 It started me thinking what type of hat would Santa wear if he wore ? I then ask Mati at Fair Isle Crafts Co-op if she had time to make me one from my suggestions. The hat should have a white band with a red pattern traditional but similar to a snow flake. The rest of the hat should be red with white patterns. I suggested the use of the classic Fair Isle tree pattern would look like Christmas trees and Mati agreed. We wanted to use small pattern at top slowly getting bigger like falling snow upon the trees. From there Mati completely designed and chose the patterns to perfection. Mati then skilfully hand framed knit the hat decreasing the stitches creating a traditional shape to a stunting result. 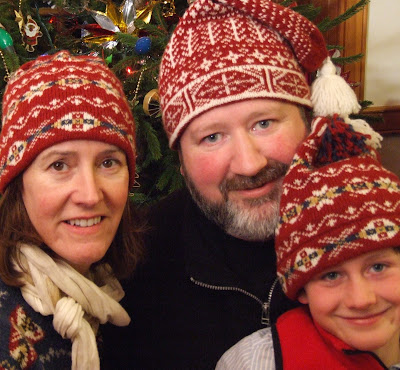 What Mati and I didn’t know was my wife Liz had already asked at Fair Isle Crafts to knit me a traditional hat for Christmas? Oops! The first hat knitted fit Liz perfectly and the red looks so good on her. So another larger hat was made that I love, but Henry has now commandeered it. I hope he lets me wear it from time to time as I think hats could also be worn year around. We of course love to buy local and the whole family is delighted with our Fair Isle Christmas Hats. 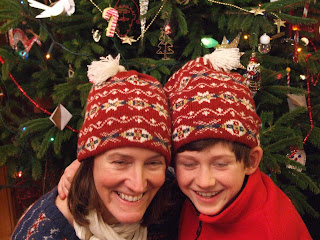 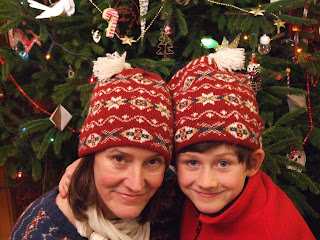 Look at these two goofballs... Same smile! Same expressions! they crack me up!
Thank you Fair Isle Crafts Co-op for making our Christmas!
Posted by tommyart at 23:15