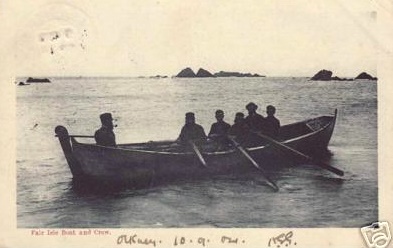 When using the words most people think of it as anything knit with a pattern. , is a real place with rich traditions, history, wildlife, some 1200 sheep and about 69 and people call it home as I do now. My wife Liz Musser our son Henry and I moved here from Upstate New York less than a year ago. Shortly after arriving I fixed something around the house with a piece of aluminum ship wreck I had found among the rocks at what I hesitate to call it a beach at the bottom of a cliff, it was then I realized I was starting to flow with the Islands unique creativity and ingenuity. Fair Isle is owned by The National Trust for the small island is only 1 by 3 miles in size and the only spec of land in a 50 mile shipping lane between the Shetland Islands and the Orkney Island of North Ronaldsay in northern . Fair Isle is also known for being the most remote inhabited island in the .  The Islands defiant cliffs are sculpted by the fierce Atlantic from the west and the treacherous from the east and totally cut off from the world at times of wild weather.  With no tree in sight, the windswept hills are full of sheep and birds. The lichen covered stone walls divide the croft lands to the very edges of the isle abruptly ending at sky and sea. Crofting and small farming is also on the edge of disappearing all over the world and linked with these traditions are sheep and of course knitting.


People on have always had many jobs and I’ve never heard of anyone being just a knitter. For hundreds of years the islanders would row their small fishing boats out to the passing ships to trade goods such as salted fish, lamb, wool and knitwear. The seamen mostly from Shetland and had traveled all over the world and new the value of what the Fair Islanders developed. The double knit construction with fine wool yarn made the garments light weight, warm and with unforgettable colors and style. The jumpers and hats became much sought after items, the hardy Shetland men often where hired on to crew scientific explorations to the North and South poles, even up Mount Everest and insisted on knitwear to be ordered as necessary equipment before departing to the ends of the earth. 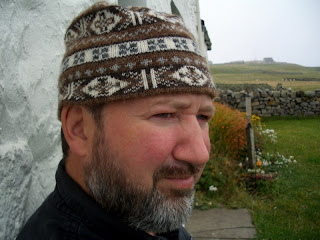 Me and my 1st Fair Isle Crafts made hat.
Where did the patterns and skills come from? Some say it was the Spanish Armada ship wreck of 1588 or maybe Norse, Celtic or Scandinavian influences. There is even a story of a man gifting kaleidoscopes to the islanders giving early design inspirations to the knitwear. Some or all of these inspirations may have had some influence on the designs but most of the credit should be found in the entrepreneurial creative spirit on the ingenious make do islanders that developed a niche market that seamen couldn’t pass up when sailing by. The two colors of yarn at any one time and the symmetrical patterns set in rows that never repeated just some of well known characteristics of . One of the lesser known traits of Fair Isle is like Scottish kilt tartans each Fair Isle family or knitter even will have their own specific patterns and color combinations. In today’s terms had the Malden Mills Polar-Tec Fleece of the early 1900’s. reached its height when the British Royalty took an interest and started to wear it while golfing. Leading to demands far beyond the Fair Isles product levels, soon Fair Isle was being made in the Shetlands then and it was faster and cheaper. It lost it’s individuality and history and what most people see to day is what some people call “Faux Isle” and is likely made in China by garment industry designer for large labels with senses of history hardly going back to last spring. History has a way of repeating it self, Malden Mills has the best quality and the originator of polar fleece and bankrupt again from over seas competitors. I would welcome some corporate responsibility back to to help insure the traditions that still endure. 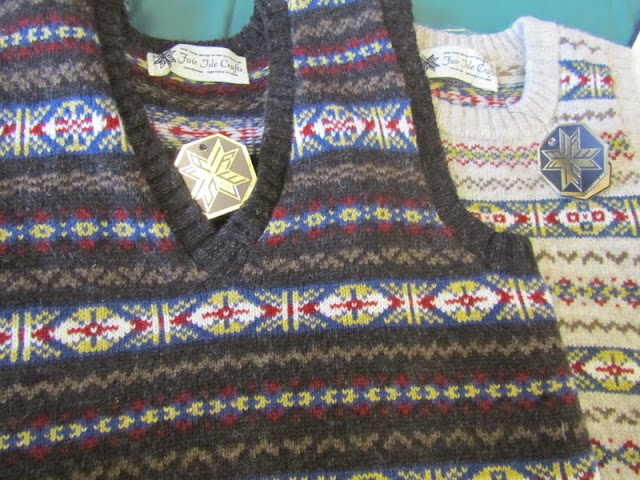 Fair Isle Crafts - Knitwear made on Fair Isle.
Where is today? The last of the production hand knitters is 85 and can knit a jumper from memory using no charts or guides having knit more than 1000 fair isle jumpers and is now retired and only knits for her grand kids and family. Her husband is 83 a master hand spinner has just finished making his 100th spinning wheel most of the wood has come from shipwrecks and wood washed ashore during storms and is not taking anymore orders. I consider this husband and wife to be international treasures. Some islanders continue knitting at home for personal and historic reasons, while other have chosen to make product available to visitors.  Two Guest houses here offer knitting and spinning work shops you might even start by clipping your own wool off an unsuspecting sheep. If it is not made on Fair Isle it’s not , so say the members of the Fair Isle Crafts Coop. The coop is 25 years old and does hand frame knitting in keeping to traditional style, consisting of about 8 women. The older women wish to retire and the younger women find it hard to find time to knit. For example the youngest knitter is 26 she can trace her family history on back though the Viking sagas some 900 years ago. She is an engineer working for the community electricity company, a member of the fire brigade, tends to 42 sheep and a large garden, the first female crew member on the Good Shepherd Ferry Boat, some how she still finds time to knit, All the knitwear is readily bought up by visitors to the island almost as soon as it is made, The production levels low as are the revenues making the knitters coop more like a heritage organization than a business. There is a wonderful small museum that documents the past, and I hope funds are found to renovate a beautiful lighthouse into a arts and craft center in which the true traditions of Fair Isle Knitting can be taught and continued into the future. 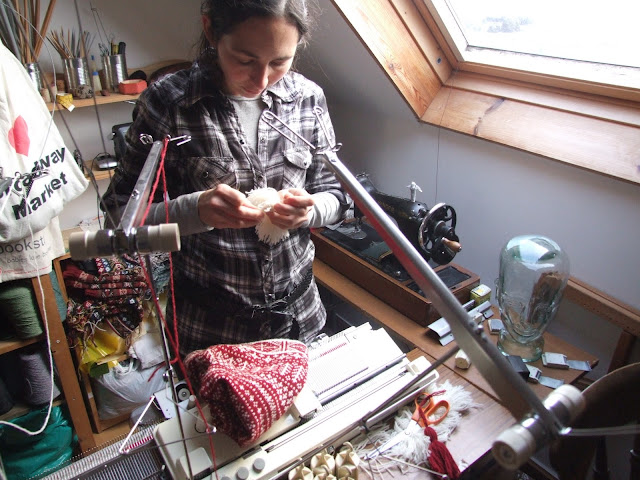 Fair Isle Today... or at least a few weeks ago
Fair Isle Crafts Co-op  member Mati King in her knitting studio custom making my Christmas hat.
Well it now 2011... The good news is 114th spinning wheel has been made and no signs off stopping. The bad news... Fair Isle crafts has lost their youngest knitter years ago and now down to a hand full of members and only 2 or 3 that actually produce knitting for sale. The bottom floor of the South Lighthouse remands empty and no investment to continue the Isle's crafting heritage has been made or found. Faux Isle is high style and Fair Isle still doesn't see a penny. Ending on a positive note the Island historian is soon starting a weekly class on hand knitting, teaching the Fair Islanders participants how to knit a classic fisherman's hat.
Please share this post with knitters everywhere!
Posted by tommyart at 18:16