A strange call comes from a flushed Pipit as 14 year old Jimmy walks across the croftlands. The inquisitive young man follows the bird and sees unusual white markings. Later the boy recounts his observation of white mantle stripes and the swooping movement in flight to his father George (Fieldy) Stout and house guest, the pioneer ornithologist & naturalist Surgeon Rear-Admiral John. H. Stenhouse. The next day, relocated at Gaila, Jimmy and Stenhouse shot the bird while feeding on standing oats. With close inspection of the bird in hand, Stenhouse is quoted to say the locally famous phrase…

Among Birdwatchers Jimmy is best remembered for his finding and collecting ’s first record of Pechora Pipit on , Shetland, in 1925 as a teenager. The Pechora Pipit was skinned and is still in the collection at the National Museum of Scotland in . Jimmy received £10 for his keen observational skills and that was a large sum of money on in 1925… also Stenhouse gave him a book:

R. G. Wardlaw Ramasy’s (1923) Guide to the Birds of Europe and North Africa, inscribed “To James Stout, in remembrance of his pleasant companionship at in Sept. 1925 & our successful hunt for the Pechora Pipit. From J. H. Stenhouse. , October 1925”

It is not widely known that young Jimmy was at Stenhouse’s side as a aid (carring the gun, etc.) much of the Autumn as they also collected the first British record of Paddyfield Warbler that very same September.  It is not surprising that these events, his father’s passion and living his entire life on led to a life long fascination with birds.

That book must have been a great source of knowledge over the years helping in the identification and education for not only Jimmy and his father but a resource for the whole island. A few years before Jimmy was born his father, most commonly known as Fieldy, had already collected many skins of British rarities. . Fieldy an other Islanders were encouraged by visiting Ornithologists & Naturalists, most notably Dr. Eagle Clark and his friend the Duchess of Bedford, to shoot anything that looked interesting as they were big collectors of birds' skins.

Several Islanders soon became skilled skinners of specimens and occasionally supplemented their income, providing bird skins to museums and collectors. Jimmy, Fieldy and other Islanders' expertise grew with continued contact with visiting ornithologists & birdwatchers. Already crack shots a small group of Islanders honed there observational skills just as modern birdwatchers today any tiny deviation in call, flight, or colourization would lead to pouring over there resource books and collected wisdom. The Fair Islanders would never have spent money to post a misidentified bird so they had extra incentive to make positive identification. The unassuming experts on their own patch were a force of nature, sometimes teaching the professionals a thing or two. 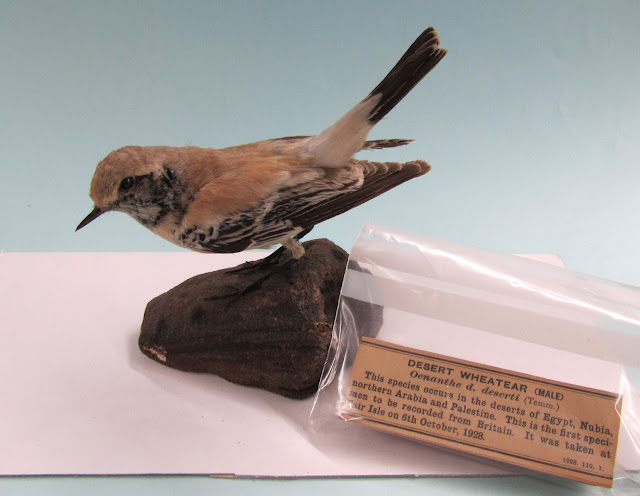 ﻿
Oct, 6th 1928 The note attached to the skin read “The Bird was with difficulty secured, it being very wild, and had apparently arrived that day after a strong south-easterly wind on the 5th. The National Museum of Scotland confirmed the bird as a Desert Wheatear shot on the Houll near Midway a first record for Shetland and a sixth for .

The one that got away… Jimmy referred to this story as his other first for . That same October 1928 a Calandra Lark was collected and sent to the but the bird’s skin was lost in the post. Only seen and confirmed by Islanders, his Calandra Lark record was never accepted but is occasionally noted. As in Birdwatching and Ornithology today sometimes only the seeing is believing and the right people need to see it, not someone else. The second British record is one of the four subsequent sightings of Calandra Lark that have been accepted since 1978.

In 1931 Jimmy shot what was believed in flight to be the first Pallid Harrier ever seen in . In hand Jimmy & Fieldy confirmed the identification, the bird skin was sent to . In the identification was discredited as not a Pallid Harrier but that of a Montagu’s or Common Hen Harrier. Fieldy was furious and wrote a letter insisting the bird be sent on to for further review. Many weeks later they received confirmation of what they already knew. The bird was an immature male Pallid Harrier, an understandably tricky identification. The two other visual records from 1942 &1949 were both subsequently rejected and they also were never shot! This was due to the new emphasis on birdwatching rather than shooting.

The Stouts became friends with George Waterston before WW2 and even wrote to him during his stay in a German prison camp. Jimmy was an instrumental supporter of George Waterston's development of the Fair Isle Bird Observatory. Jimmy and the rest of the Fair Isle were happy to have a new Laird but Waterston soon realised it was hard enough to run an observatory. Fair Isle was then sold to the National Trust for . The new observatory changed the island birding dynamic, bringing in their own semi- resident warden and experts. Jimmy’s advice was less sought by visiting birdwatchers but his expertise was still called upon from time to time as sometimes he was the only one around who had ever seen particular rare species before. In the early1950’s, he and two other islanders were asked to trap and record winter bird sightings for the Obs. Most notable was the record of a large all-black petrel seen as a crew member from the deck of the Good Shepherd ferry boat… a probable Bulwer’s Petrel of Jan. 18th 1952 as written in FIBO Warden Kenneth Williamson’s book “ and its birds”
Fair Isle’s first Red- Flanked Bluetail was spotted on the 29th of September 1981, a second record for . John Holloway, a keen birdwatcher who lived on for 6 years, recalls racing across the Isle to see the bird. Along the way he passes Jimmy tending to his ewes and shares the exciting news. Jimmy lifts his head and looking at John, says...

He put his head down and continued his work with his sheep as John went quickly on his way duly impressed. Tarsiger Cyanurus is the Latin name for Red-Flanked Blue Tail. This story is a testament to Stenhouse’s predictions and to Jimmy who had for most of his life been well aware of this species. The twitch was in view from where Jimmy was working but he waited until his work was done before eventually seeing the long awaited Tarsiger.

On November 7th, 1981 Nick Riddiford’s first Autumn as Warden of  Fair Isle Bird Observatory was seemingly over. On his way to the Hall for a community event he drove the Gully Trap on the way. To Nick’s surprise a small warbler flew into the catching box… a Firecrest! He knew everyone would be at the Hall so took it along to show them and especially Jimmy. “There you are”, Nick said to Jimmy: “First for ”. “You’re right, boy”, says Jimmy “but only because I did not have a gun with me on the 23rd of September 1934” when I saw one on the wall at Setter.

“The things you see when you don’t have a gun”
a humorous saying attributed to James  A. Stout.

To this day, islander visual records are not generally accepted without verification from non-resident experts. Sept. 24th 1982 a group of bird watchers walked by while Jimmy was weeding his neaps and vegetable rig near the road. Jimmy called them, “there is a River Warbler in that thicket there” They laughed and nodded their heads and just kept walking. Later the story was retold in jest to other birders who responded… what old man and where! That’s Jimmy Midway! They all ran back to find and scrutinize this skulking almost impossible warbler. Jimmy identification was correct. 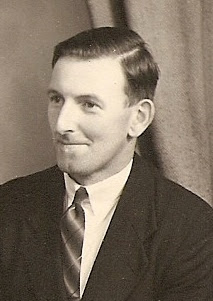 Birdwatchers often refer to him as Jimmy Midway as Midway is the name of his House, while Fair Islanders know him as Myers Jimmy as Myers being the name of his croft. Over the years he has seen birdwatching's beginnings started with a gun and now shot in digital HD. In his life he has mastered a great many things. His skills and knowledge of avifauna were equalled and surpassed at sea at the helm of the Good Shepherd Ferry. He could predict the weather and changing tides with a glance out the window. His knowledge of crofting and tending to sheep has been passed down to his sons and grand children.  He was just as enthusiastic to talk of the nuances of catching lobster as sightings of rare birds. Still today the slightest mention of the always sparks the memory. Anyone who has ever had the chance to meet James A. Stout has ticked their meeting with the knowledge and honour of knowing an exceptionally “rare” man.

Written by Tommy H. Hyndman with help from Jimmy his Family and Friends.
Special thanks to John Holloway, Nick Riddiford & Brian Wilson