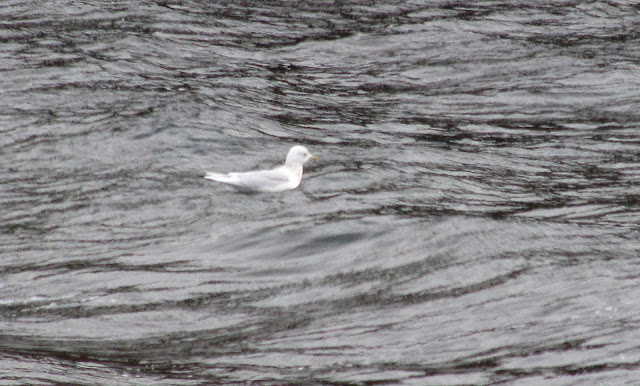 I haven't seen a Iceland or Glaucous Gull since last winter? I'm not sure when the last island record is for either is? but it's been a while for me and I've been looking! I am quite pleased as this is a self-found tick and any bit of joy you can find winter birding here is more than welcome. With the strong south west wind I am hoping to find a Rare American Bird (bravo Will Miles and your Killdeer) This morning a gale was pounding the Island and I check around the Island roads,South lighthouse and the South Harbour from the safety of the car while dropping my son off at school. Nothing much about really but the Harbour was full of Gulls & Eider Ducks (About 100 or so) I sifted though them Herring, Black Backs and Black Headed Gulls nothing much and then drove home. About 2:00 the wind and the sea died down and I went for a walk with Steven Wilson and as we walked past the South Harbour and only about a dozen birds remained. It wasn't hard to find the big white white one in the middle. I took a few record shots before it flew away.
I have just had to add all the photos I have and enlarge them... as requested by a fellow Birdwatcher who was thinking it could be Iceland? But, I thought it looked just to big to be Iceland but I'm happy either way.
﻿
﻿

It was way easier and better than ever to find a good bird with my new old binoculars!
I just received a box in the mail from a friend, a skilled birdwatcher and a former Auld Haa Guest House visitor. I'm thrilled to have these beauties on permanent loan until the day I can afford a quality pair. Way better than what I was using I cannot thank him enough and they have already helped to spot a good bird!
Update - added Feb. 3rd 2011
I saw the bird again today... it does not let me get close... darn!
It is definitely a white winged gull, LOL, the wind makes it though to see and hold still.
But today I'm think it's a big Iceland Gull? 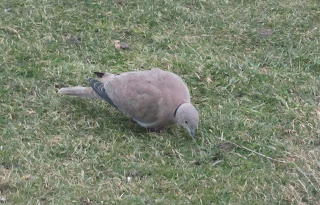 Today Feb. 2nd 2011 the wind blew in this years first Collard Dove, 2 Oystercatcher
plus a wintering Chaffinch was seen today in my garden.
Posted by tommyart at 17:21