The most remote and unlikely FC Barcelona Fans in Britain and possibly Europe.

We are originally from Saratoga, New York, USA. There football is called Soccer and considered a non-contact sport suitable for noncompetitive young children. The score isn't supposed matter and the girls play with the boys. This could be why this could be why the USA's Woman team is so good. In 2005 my son Henry started playing in a Pee Wee Soccer League at the age of 4... He always new the score and how many goal he made. I guess that's one way to teach kids to count. In 2006 we watched the World Cup matches Surprisingly broadcast without interruptions. It was then my son made a connection to Thierry Henry playing for France. Well my son was 5 1/2 years old and there was this amazing football player with his name on his back running around on TV. So once the USA was knocked out we started supporting Thierry Henry and France all the way though the disappointing final match.

In November 2006 we moved to Fair Isle, Shetland if you want to more know about that story click on link below. We soon got Sky TV and started watching European Football for the first time. I thought we should become Celtic Fans as we now lived in Scotland and my mother is an American-Irish Catholic. But moving to a small island leads you to the new and unexpected... On a island of 65 people there is and was already one family of Celtic football fanatics with a few children about Henry's age. My son felt like they had island Celtic ownership and he had to pick his own team. At the time I couldn't convince him that everyone can support the same team, but soon we found Thierry Henry again just as he moved from Arsenal to Barcelona. The 2006-07 season was not Barca's best but we have been well rewarded ever since. Soon we fell in love watching the whole team and their style of play. One year Henry got good laugh when he received 2 Henry FC Barcelona Jerseys for Christmas, one from me and one from Santa. We were sad to see Thierry Henry leave Barca but he did go to our New York (Red Bulls) team.

link to our story http://fair-isle.blogspot.com/2011/02/chinese-new-year-my-fair-isle-story-in.html
﻿
﻿  Henry & I are now a total Barcelona fans and we love the whole team! When I asked Henry to name his favorite player he said, Lionel Messi! Gerard Pique & Andres Iniesta! Plus Pedro, Victor Valdes, Xavi, Bojan, David Villa, Alves, Abidal & Keita with a special shout out for Carles Puyol! He even named his old favourites like Edo. Ibrahimovic and of course Thierry Henry.


Our love of the Barcelona players made the 2010 World Cup Football much more enjoyable as we watched
our Barca players making up most of the winning Spanish team. We have never been to Spain or Barcelona though I have wanted to go ever since studying Antonio Gaudi's Architecture in art history class in university circa 1982. We are not Spanish though my mother is said to be "Black Irish" with Spanish blood and dark hair and eyes from a Spanish Armada Shipwreck sailor descendant from 1588. It is a bit removed but that's my only real Spanish connection. One thing that comes with being a FC Barcelona fan is a strong dislike for Real Madrid! With the unprecedented 4 games to be played in a row we figure the Barca players should know that they have support from the most remote places on earth including ours! Good Luck! We love You! Cheers! Tommy & Henry 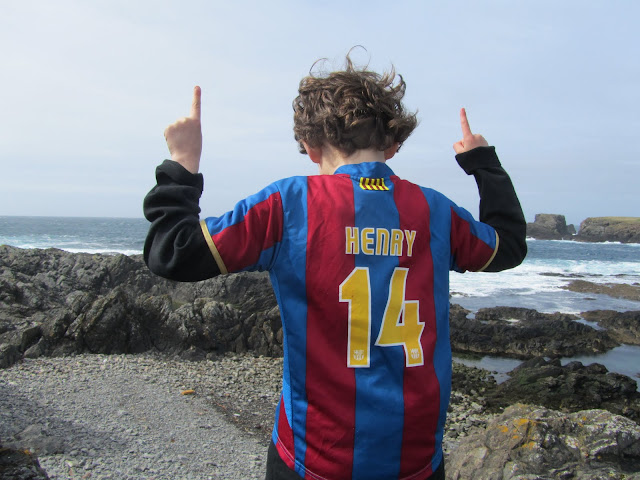